For almost a century, IBM  has made the computing tools that solved some of the world's big problems. IBM punch cards powered Eniac, the first big programmable computer in 1946. Deep Blue beat world chess champion Garry Kasparov in 1997—after losing the first round. And of course Watson won Final Jeopardy —and $77,000 for charity—over two human opponents last year.

But some problems require a human touch. In B2B marketing, one of the toughest is this: How do you make social media an efficient, cost-effective channel for finding new customers and selling to business clients? It's hard to automate messaging in social media; the channel values nuanced personal content over marketing pitches. And it requires a lot of that content, a labor-intensive creative task that most sales teams don't have interest in adding to their daily chores.

In IBM's case, the specific problem was that the effective traditional ways of finding B2B customers for hardware and software products—telemarketing and email—were not producing the same results when applied to selling web-based services such as cloud computing and data security.

A buyer preference study commissioned by IBM revealed that one-third of its B2B buyers were already using social media of various kinds (Twitter, blogs, online forums) to engage with vendors and learn about products. Buyers who were not necessarily the decision-makers but a level or two below that, under 40 and in a position to influence a decision, were even more likely to be using social media to collect product information. And a full 75% of respondents to the survey said they were likely to use social media in the future as part of their purchasing decision. 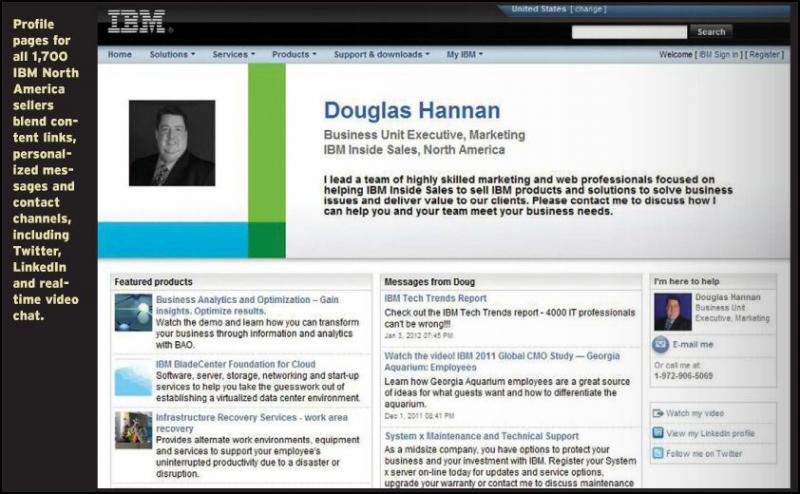 "That led us to say we need to integrate social selling into the way we do business," says Douglas Hannan, the business unit executive for inside sales marketing at IBM North America. He leads a team of 38 marketing managers and 1,700 reps who handle inside sales for all the product divisions IBM sells on this continent; and the research convinced him that the company needed to take its outbound sales force—which relied mostly on telemarketing and email—and add a large dose of inbound pull marketing through an integration with social media.

One obstacle to integrating social media into a sales or lead-gen process is that doing social well calls for a lot of content and a lot of time spent listening—too things sales staffs usually don't have in abundance.

"We really wanted to make social selling part of the basic way we sell," Hannan says. We didn't want our reps spending five minutes a day tweeting and then going back to their 'real' job."

Working with Mason Zimbler, a social marketing agency owned by Harte-Hanks, Hannan and his team chose one IBM product division, Cloud Computing, and set about designing a social framework for its seven inside sales reps. The product seemed a natural starting point for a social selling strategy . Not only was it highly digital, but heavy volumes of online discussion surrounded it, not only from IT managers but from lower-level influencers and in fact from anyone who might wind up using cloud computing in the enterprise.

IBM launched a program of what Hannan calls "intelligent listening" within social media to learn what conversations were going on about cloud computing, what trends and issues were being discussed, and what the hot-button topics in the field were for users or considerers. 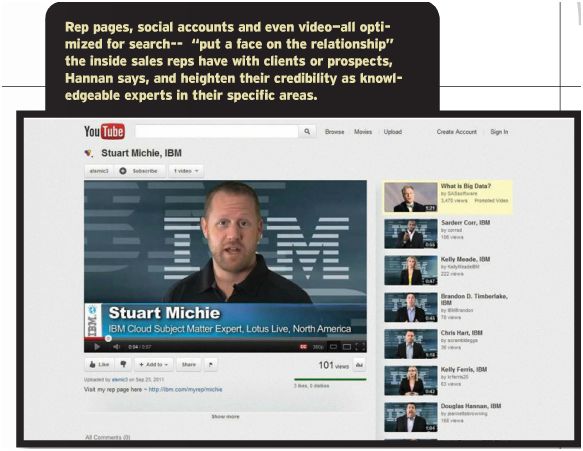 At the same time, the seven Cloud Computing reps were set up with accounts in Twitter and LinkedIn, and IBM and Mason Zimbler set about identifying the collateral assets the company had in-house. Those assets were combined with relevant content  from outside IBM—mostly research studies and white papers from third-party sources such as analysts and industry experts. The whole resource was put into a social marketing calendar designed by the marketing department, with pre-written intro copy and correct bit.ly links, and loaded into an RSS feed that the reps could access whenever they opened Lotus Notes to check their email.

Sales reps could simply check that RSS feed, find some content that fit the context of any cloud computing discussion they were seeing, and upload them to social media and also to their new individual rep profile pages within the IBM site. Most importantly, the reps were given the ability to edit the exact wording of the tweets and LinkedIn posts  to make them as relevant as possible to the discussions they were taking part in within social channels, and to make them sound like authentic one-to-one messages.

The results of a six-month pilot of social selling within the Cloud Computing division were compelling. The seven reps grew their aggregate LinkedIn direct followers from 535 at the beginning of the test to 3,500, and their reach (followers of followers) went from 54,000 to 1.3 million.

"Basically we got lots more pairs of eyes reading our content with a very low-cost investment—just the rep pages and some social messages," says Hannan. "So we said, 'This is definitely working; we're rolling this out everywhere.'"

All 1,700 IBM North America inside reps have now been trained and enabled with tools for social selling, and the company is preparing to extend the initiative to overseas regions for some of its digital brands. The inside sales team now has a total of 50,000 LinkedIn connections and has posted 20,000 tweets; rep pages have received 100,000 visits in the last six months.

Those individual rep pages serve a couple of different functions in the social selling process. At a high level, they help create a "brand" for the seller, so that social followers and potential customers can link that useful content they've been consuming via Twitter or LinkedIn with an actual human being. The reps also create short videos in which they discuss their areas of expertise. Both the pages and videos are optimized for search, so that a search on the keywords relevant to a rep's brand affiliation will bring up that person's profile page and video clip.

"For the inside sales team, which doesn't usually get to travel to see the client, we've found that the rep pages put a face on the relationship with clients or prospects," Hannan says. "They may come to us at first because we're IBM, but they continue with us because that sales rep brought some content of value to them."

It hasn't always been easy to persuade sellers who are used to trying to reach prospects directly to spend time in social media, listening to conversations and building the IBM brand into a trusted source of objective information. Hannan and team encountered resistance mostly from the baby boomers on the staff, who tended to complain that they were too busy to engage with social. (The millennials of course, took to it immediately.)

But that time spent eavesdropping is far from wasted. "At the rep level, social media is less about tweeting than it is about listening, reading and knowing what people are talking about," Hannan says. "That's what lets them better tailor their contributions to the discussion." Reps are even given lists of hashtags specific to their verticals ("#informationsecurity") to track relevant social conversations as they develop.

To encourage buy-in among the staff, Hannan developed a series of eight short four-minute video talks featuring "star" reps discussing best practices for the new social media tasks, including using Twitter, LinkedIn and the two-way video chat feature. That pushback from the more seasoned staff has largely disappeared. "All it takes is to see someone else saying that they tweeted something and then got mentioned in a blog to make them see the power of this type of relationship," he says.

Still, Hannan has gone so far as to set up some basic metrics to gauge sellers' social participation, such as recommending tweeting some kind of content once a day. He admits those performance measurements are still in the draft stage: "We don't yet know the right amount of social activity. But we know that zero is the wrong number." 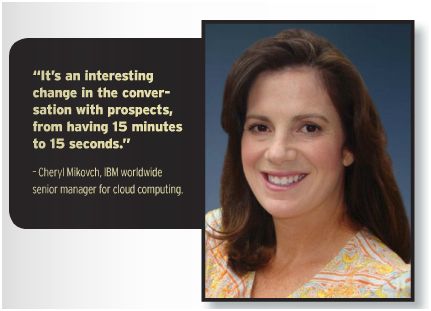 Reps are also given lists of hashtags specific to their verticals and asked to follow those topical discussions in Twitter.

Cheryl Mikovch, worldwide senior marketing manager for Cloud Computing at IBM, says one task has been to educate the marketing department, which provides the template social messaging reps can customize, to think in terms of "social soundbites."

"We want them to think in terms of snippets of content that have the heart of the message but that allow the sellers to make it their own by editing or adding additional language," she says. "It's an interesting change in the conversation with prospects, from 'I have 15 minutes with you' to 'I have 15 seconds with you.' So what is that social soundbite that will resonate most powerfully with a prospect or client?"

Research, including the 2012 Chief Marketer Prospecting Survey , suggests that one of marketers' major complaints about lead generation within social media is the relative difficulty of measuring the channel's capacity for drawing qualified prospects and thus ascribing a return on investment.

In a sense, by integrating the social channel so tightly into its outbound sales operation, IBM has done something of an end run around those metrical challenges: It's still the sales reps that are responsible for closing the transactions and creating the return. It's just that they now have a new set of tools for finding and engaging with those prospects who might convert.

"It isn't social media that creates ROI—it's the sale team," Hannan says. "But social causes engagement and boost the number of engagements, helping reps extend their networks to people they might not know." The viral nature of social media means that it could be responsible for many referrals. 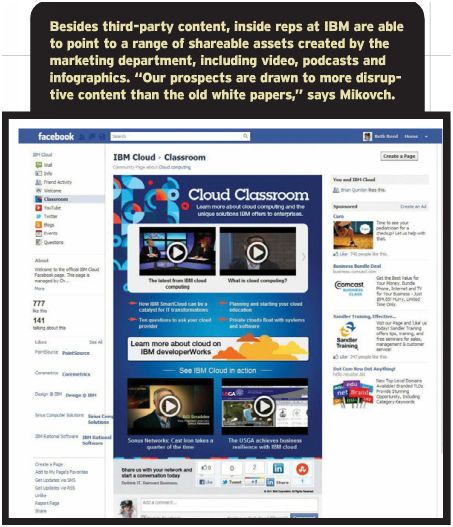 Then too there's the value of listening and learning about sales opportunities at an early fact-gathering stage of the purchase decision. That's when reps can offer up an independent white paper or some other piece of third-party content that the prospect might be able to use—and oh, by the way, IBM offers a good product that might be what you're looking for.

"If we didn't do this kind of social listening, we wouldn't know about a lot of these opportunities until it was too late to get considered," says Hannan. "Social media let us engage earlier with our clients—hopefully, earlier than our competition."

Nevertheless, social leads can be scored (by hand for the moment, not automatically); clients' actions from social media can be tracked (watching a webinar, downloading a white paper); and some sales can be attributed directly to the reps' social efforts. More than 20 sales wins so far have come out of social selling by the Cloud Computing division, according to Mikovch.

Even if he can't point to a hard ROI for social selling, Hannan has seen empirical evidence of its impact. During the pilot phase of the project, the Cloud Computing division tested an offer of 60 days' free trial of the product. To test the power of social media, the offer was first released only to the inside reps and published only in their social channels; it was released on the web a week later.

The result was 10 orders the first day the offer went up in social media, and orders for product during the quarter that were four times higher than during the same time the year before.

"Granted, the offer was free, and it's never hard to sell free," Hannan allows. "However, what the example really shows is the power of social messaging. It's almost like digital word of mouth; it gives people not only the chance to hear from the vendor but to quickly connect with each other.

"The offer was successful because it wasn't just a single touch but an extended retweeting and posting to a broad audience. Think of the cost of email once to 1 million people, versus one 140-character tweet that got the message out in five minutes."