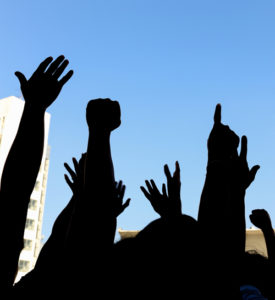 Increasingly, consumers are looking to businesses to drive change on issues they care about. Edelman found that 64% of buyers say CEOs should take the lead on change rather than waiting for the government to impose it.

This much is undeniable: What used to be seen as “church and state” separation between brands and hot button issues facing society is now a situation of blurred lines.

Now, we see consumer brands like Patagonia taking a stance on environmental protection by donating $10M saved in recent tax cuts to grassroots activism (read CEO Rose Marcario’s announcement.) This is in line with the company’s brand commitment “1% for the Planet.”

We see Nike supporting Colin Kaepernick’s protest of police brutality against African-Americans by kneeling in NFL games during the National Anthem in their now Emmy-award winning campaign featuring the copy “Believe in something, even if it means sacrificing everything.”

This is not just a PR issue, or a matter of including certain societal hot button issues in a marketing / PR campaign. It also extends to internal policies about who companies chose to do business with.

Wayfair recently saw the impact of not taking a stand on an issue, namely, the treatment of immigrants (including 12,000 children) in border detention centers. When it was revealed that the company had sold beds to BCFS, a contractor that manages the camps, 500 employees staged a well-publicized walkout of the Boston headquarters in protest. Their demands? Stop doing business with BCFS, and establish a code of ethics. The event shined a light on what can happen when internal strategy is not codified about who a company is willing to do business with and how to make that decision.

A similar situation occurred with cloud computing giant Salesforce.com, when 650 employees signed a letter questioning the company’s business deals with the US Customs and Border Protection Agency.

“We are particularly concerned about the use of Service Cloud to manage border activities,” the employees’ letter reads. “Given the inhumane separation of children from their parents currently taking place at the border, we believe that our core value of Equality is at stake and that Salesforce should reexamine our contractual relationship with CBP and speak out against its practices.”

Though CEO Marc Benioff clarified to Recode that the software was not used in the controversial act of separating families, the company did create an Office of Ethical and Humane Use of Technology to set industry-wide standards around such issues in the future.

Failing to take a stand on the right issues to avoid risk is actually the larger risk for brands as it threatens a slide into irrelevance. Unfortunately, the prevailing mantra of many marketers is “maybe if they keep seeing our brand, they won’t notice we have nothing new to add to the conversation.”

It’s important for brands to understand which issues they should have an opinion and point of view about, and which they should not.

Appropriate issues are those that intersect with your buyers. They could be particular to an industry (see Salesforce and its take on cloud computing, or Catalant and its beliefs around the role of contract workers, or Moz and its belief in white hat SEO.) These are beliefs and stances just as meaningful as societal issues.

Other appropriate narratives for businesses to have a say about are those that intersect with the workings of the business itself—pay equality and parental leave, the fair treatment of minorities at work like people of color and LGBTQ+ employees, or environmental issues as impacted by industry.

Consider these four benefits of showcasing what your company believes in:

1- Taking a stand is a way of creating relevance with the buyers and employees who matter (and clarifying who you’re for, and who you’re not for).

2- It’s a way of communicating values, which is how individuals feel a sense of connection with brands (as we do with each other.)

3- It’s a way of signaling a brand can be trusted in an age where 42% of buyers don’t know which companies to trust (Edelman.)

4- It gives your employees a North Star by which to operate and make decisions day-to-day (critical for large organizations.)

Overall, organizations who take the time to clarify what they believe, what they stand for, and what they stand against are those that will maintain relevance in this new age where brand and consumer values intersect. However, it takes great internal alignment, bold leadership from the very top of an organization, and marketing leadership who is willing to protect their company from the risks of pandering or virtue-signaling.