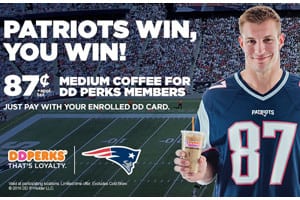 Connecting football fans with the DD Perks loyalty program has benefitted both Dunkin’ Donuts and the New England Patriots.

“The single view of the customer is huge,” said Hudler, noting that unlike the Patriots, which are pretty much uncontested in the New England area when it comes to loyalty, Dunkin has tremendous competition from Starbucks and other coffee shops. “The challenge is how to get people to come in more frequently or come to us at times they might be going elsewhere.”

The New England Patriots have gone through several iterations of its CRM system, first implemented about 12 years ago. “It’s hard to find the right processes and pull together all the new data sources that are coming online every year,” says Jessica Gelman, CEO of Kraft Analytics Group, which powers the business side of the Kraft Sports Group, the owners of the Patriots. “We’re in a really interesting time now, because we’re able to control it more and a single customer view is on the horizon.”

While the Pats are uncontested when it comes to team loyalty, there are other lines of business besides ticket sales, such as apparel. There, the team is competing with numerous retailers both online and offline.

The Patriots wanted to connect with fans on non-game days, she said, noting that the DD Perks integration was a perfect way to make this happen.

DD Perks rolled out in 2013. “We felt Perks was a great way to reward people in the restaurant, but we wanted to give people outside the restaurant too,” said Hudler.

The Patriots created their own loyalty program, Patriots365, for season ticket holders and wait list members. Connecting the two programs seemed like a natural.

“We’re in a business that is hyper competitive,” said Hudler. “We want to do anything we can to convince people to take a right into Dunkin’ versus someplace else.”

After members of the programs connect their two memberships, they earn 15-cents toward their ticket purchases for every $1 they spend at Dunkin’.

The feedback has been extremely positive, said Gelman, also speaking at Future M.

The benefits are often tied to Patriots activity. For example, after a recent Sunday win by the team, members of the two programs received an email offering them a coffee for 87-cents. And, Patriots365 members could also be entered to get a gift card for the Patriots Pro Shop.

The back end systems to power the programs look into numerous variables. For example, are people on the wait list spending more than those with season tickets?

Both enterprises look at number of variables overall. The Patriots gets tremendous free advertising on television thanks to the game telecasts each week during the season. But there are other mediums that continue throughout the year. “There are 12.5 million Pats fans across various social platforms—how do we convert those people from fans into paying customers?”

TV is less effective now than five or 10 years ago, but it still works well for Dunkin’, Hudler notes. “When I think of paid advertising, I think the media mix, will look dramatically different five years from now.”