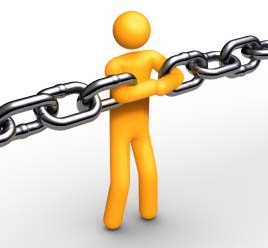 Inbound marketing tactics like search engine optimization or social media are sexy. Why? They don't cost as much as outbound efforts like direct mail or email, which are based on interrupting a prospect to awaken a need.

Inbound tactics are effective for consumer brands, which rely on getting a high volume of prospects into the sales funnel. Prospects who are drawn in through a search for one type of item can be cross-sold another, and are more likely to return later to make a purchase unrelated to what they were initially looking for.

The process for B2B sales is different, says Greg Ott, CMO at B2B web marketing firm Demandbase. First, the pool of prospects is considerably smaller than it is in the consumer arena. Not only are there fewer businesses than consumers, but not all businesses require the same products or services. Of the 14 million or so in the U.S. for instance, only a handful are likely to require enterprise resources planning software.

Second, there has been a shift in B2B purchasing patterns—a shift Ott characterizes as "Buyer 2.0."

"Buyer 2.0 prospects are doing a lot more of their own research and solution exploration before engaging with anyone's sales team," Ott says. As a result, while the sales cycle (the time between when a prospect's purchase intent becomes known and the sale is finalized) has been shrinking, the buying cycle (which includes the prospect conducting anonymous information-seeking) is as long as it ever has been.

The shrinking sales cycle has put a lot more pressure on B2B companies to engage with prospects swiftly and effectively. The challenge is that resources are limited—and salespeople's time is among the most limited and expensive of all those resources.

So is the answer eliminating inbound sales tactics in favor of outbound ones, which can be carefully calibrated to target only viable, pre-qualified contacts? Not at all, says Ott.

Instead, the goal is to make inbound marketing function like outbound, by having mechanisms in place that filter incoming prospects.

As an example, Ott talks about a firm that offers enterprise resource planning software. "Let's assume that more than 80% of the marketer's revenue came from companies in four verticals," he says. "Why would they spend a dollar outside those four verticals? They could target [the verticals] by putting filters in place that identify which types of companies are coming to them through their inbound tactics."

The companies that fall into those most-viable verticals would rise to the top of the marketer's lead management program. They could further be qualified based on employee size, annual revenue, or any other firmographic data point that correlates well with the marketer's existing client base.

"The more sophisticated companies are pulling in a wide range of data," Ott notes, adding that capabilities to crunch a huge amount of data from a variety of sources, including types of media mentions, is now available. "Was the company recently profiled in the Wall Street Journal?" he asks. "Has there been turnover? Marketers are crunching this data through sophisticated regression analysis to find out what the correlative factors are for high-value prospects."

Ott urges companies to make these factors known to their sales teams through dashboards. "You can help your sales team by ranking these leads on their daily dashboards based on the attributes of the companies," he says. "Marketers can tell their sales force 'this [lead], based on our analysis, has a higher probably of becoming revenue, so call on them first."

The next step is seeing whether the analysis nets out to the expected improvement in sales efficiencies. Ideally, the process will be refined as marketer plow through the results and continuously re-rank the factors that identify a quality prospect.

The ultimate goal, he says, is to use outbound tactics to stimulate the B2B sales cycle, and to use customer-based analytics to filter inbound leads based on how they compare to viable customers.